For a power clean to be truly a power, the hips in the catch position must be higher than the knees. Also known as above parallel. Anything below this position is considered a clean, full clean, classical clean, or squat clean depending on which background you come from.

How To Perform The Power Clean

The starting position for the power clean is exactly the same as the clean. Weight in the middle of the foot, shoulders over the bar, and the barbell cutting your foot in half resting against your shin.

Its important that in this starting position, the elbows are pointing out while keeping a big chest. The lats will be tight like you have a tennis ball under your armpits and you need to keep it there.

The first pull (floor to the knee) must be initiated by pushing with the legs. This allows you to maintain the same back angle as your initial set up. As you push with the legs and through the full foot, the knees will travel slightly back as to move out of the way.

As mentioned, the back will stay at the same angle as your starting position so your hips and shoulders should rise simultaneously.

get your free Course

This will ensure the bar maintains a vertical path with minimal horizontal displacement. As the bar reaches the hips, it should brush up the upper part of the thigh as you extend the hips, knees, and ankles to a tall, upright position.

At the same time, a big shrug of the shoulders along with pull the bar vertically occurs. The bar should travel as close to the body as possible with the arms and elbows positioned as they would during a clean high pull.

This part of the pull where the bar moves past the hip to the catch position is known as the third pull (hip to shoulders). This is the fastest portion of the exercise where the bar will be accelerated even more than the second pull. 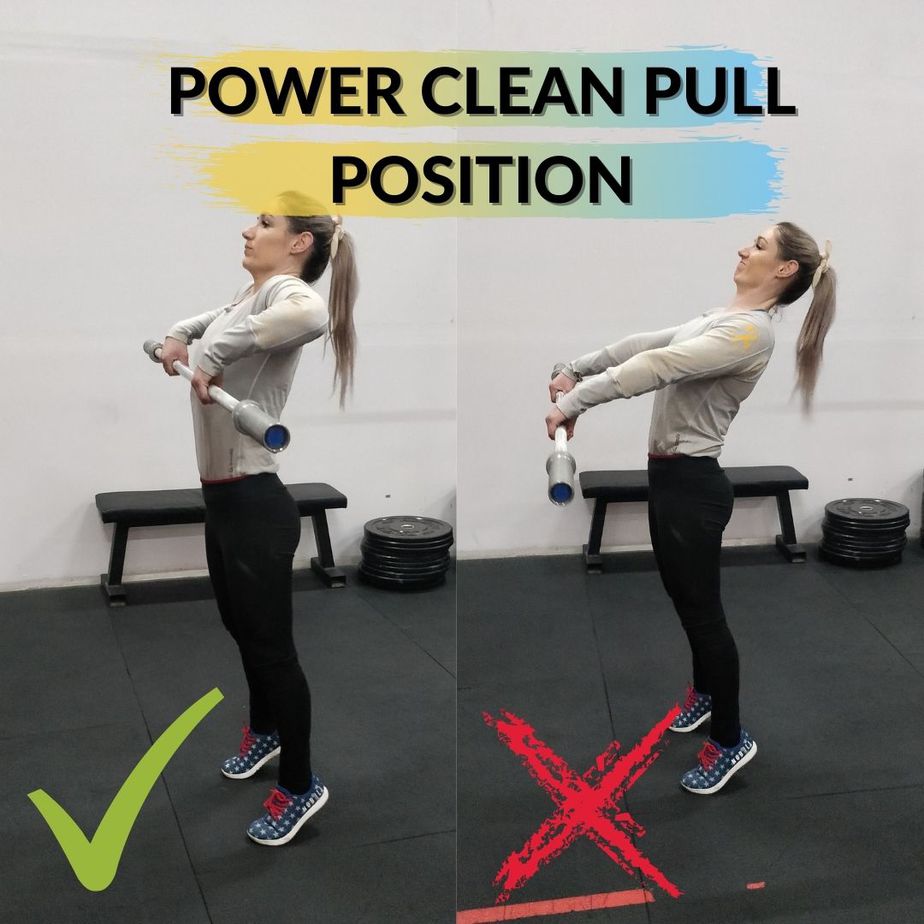 As you pull the bar up, you will also pull yourself under the barbell. This is a clear distinction that needs to be made when performing the power clean.

Pulling yourself under the bar ensures the bar doesn’t float and crash on your shoulders.

The feet will move slightly out to receive the bar. The elbows will rapidly turn under the bar to catch the bar on the shoulders with the elbows pointing as high as possible. Your knees will be bent in the catch position in order to pull yourself under the bar.

Your hands can either keep the hook grip and hold the bar in the front rack position or you can release the bar and have it sitting in your fingertips while the bar rests on the shoulders. This will be completely dependent on your front rack mobility.

Once the bar has been received on the shoulders, stand up like you would in clean or front squat until your legs are straight. That is considered the end of the power clean exercise. 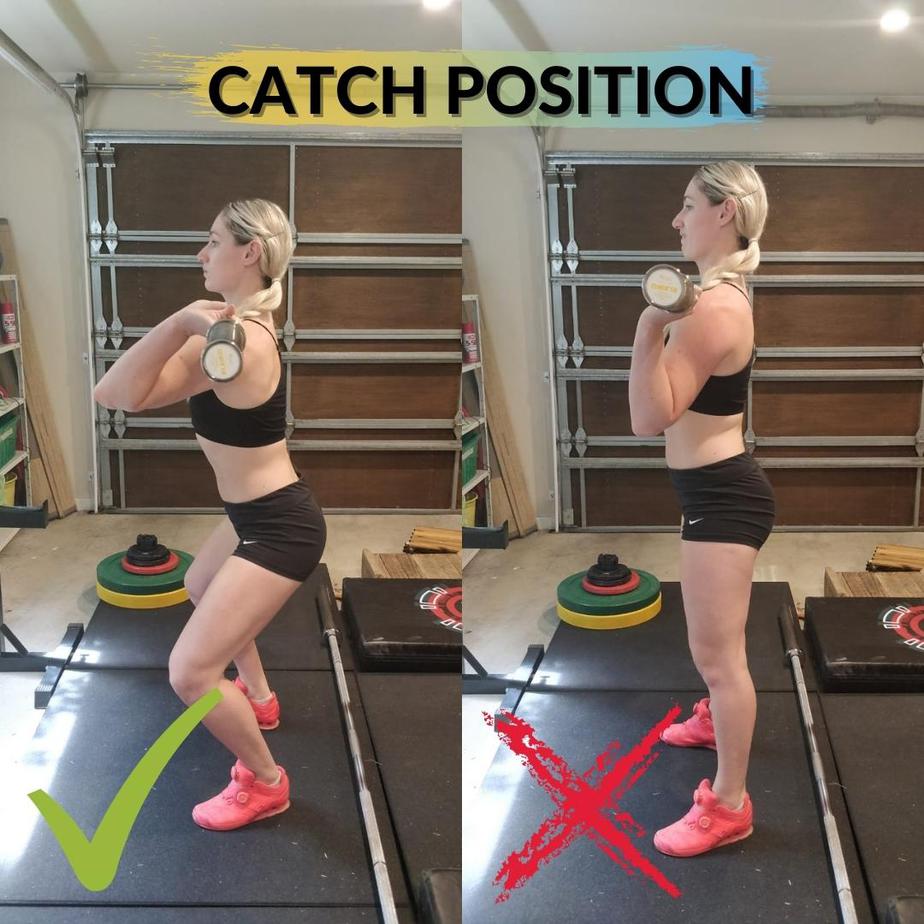 These common power clean mistakes will be in sequential order from the starting position through to the catch.

Setting Up With The Weight Through The Heels

In all Olympic lifts, including the power clean, your bodyweight should be centered through your mid foot so you are able to push with your full foot. When your weight is distributed towards your heels like a deadlift, you are no longer over the bar, but behind it.

This causes almost every problem imaginable throughout the power clean and sets you up for failure. If your weight is back toward your heels, you are going to struggle to keep a vertical bar path especially through the second pull.

Pulling With The Back First

The cue you should think of when starting the first pull is to push with the legs. This will prevent the back angle changing too early. When the back starts to come upright too early, you are no longer over the bar. This creates a problem as you reach an upright position before you’ve extended the knees and ankles.

The only way to accelerate the bar faster during the third pull is to lean further backward forcing the barbell out in front.

The barbell should be squeezed off the floor. This is so you can maintain the same back position as the set up. When you yank the bar, the hips often shoot up first losing the big chest position, the tight lats, and the higher hips removes much of the contributions you could get from the legs.

Bouncing The Bar Off The Legs

Some coaches teach to bash the barbell with the legs or hips. This is objectively wrong. While making contact with the top of the thighs or hips is important, bashing the bar kicks it in front creating a looping motion which will limit the loads you can lift and cause the bar to crash down on you.

The barbell should brush up the thigh or hips to keep the vertical bar path.

Dropping Under The Bar

You should never drop under the bar. Rather, you should pull yourself under the bar. There is a big difference mentally that will change the way you perform the power clean.

Dropping under the bar causes the barbell to float and crash down onto your shoulders. Pulling yourself under the bar keeps you connected to the bar so you can receive it fluidly and safely.

Receiving Position Of The Feet Too Wide

The starfish, the college football power clean, or the CrossFit power clean are three different names for the same common power clean mistake.

That is spreading the feet too wide when receiving the barbell. Athletes will do this so they can catch the bar higher. The problem with this mistake for Olympic Weightlifters is two fold:

Why Use The Power Clean?

Depending on the load lifted, the power clean can elicit peak velocities ranging from 1.5 – 3.0 m/s [1]. Which is over 3x as fast as a heavily loaded squat which may range anywhere from 0.25 – 0.75 m/s. Because you need to catch the bar higher than a clean, you need to produce greater speed and power to get it there.

A Regression Of The Clean

The power clean is often taught as a regression of the clean to teach the correct bar path and receiving position without having to get into a full squat. Many beginner Weightlifters may struggle with the mobility of getting into a squat with the bar racked in front or struggle to coordinate the catch position with the squat position.

By removing the squat, the movement becomes much easier to learn and teach.

Corrects The Timing Of The Catch

Having the bar crash down on the shoulders in a clean can be a problem some Weightlifters face. The power clean is an exercise that can help fix this problem.

By having to pull the bar to approximately nipple height, they also need to quickly pull themselves under to meet the bar with a fast elbow turnover in order to receive the bar in a braced position.

Some Weightlifters will pull the bar too high during a clean, and while they continue to pull, they will drop under the bar simultaneously creating too much distance between the bar and their shoulders.

Reinforces Full Extension Of The Pull

Some very fast Weightlifters can get away with not completing the pull and diving under the bar to receive it quickly. Most of us aren’t blessed with this kind of speed. Further, as the loads get heavier, this is likely to become a limitation stalling progress.

The power clean reinforces this full extension of the hips, knees, and ankles as if you cut the pull short, you will need to pull yourself under the bar much lower than if you completed the pull.

This may end up in the lift becoming a full clean, or if it’s heavy enough, a missed lift.

Train The Clean With Less Load

Weightlifters need some variation. Performing the classical clean, while specific to the competition lift, can be taxing on the body when heavy loads are lifted consistently. Further, if using lighter loads, the power clean trains speed more effectively than the clean for the reasons mentioned earlier in this section.

By lifting less load, the body can take a break for near maximal loading and focus on the speed of the lift.

Which Muscles Does The Power Clean Work?

The power clean is one of the ultimate full body exercises. It works almost every muscle from the calves up to the shoulders. This includes the gluteus maximus, hamstrings, quadriceps, erector spinae, traps, lats, and shoulders.

Essentially, every muscle except for the major pressing muscles such as the pectorals.

When To Use The Power Clean

Firstly, the power clean makes a great primer for the clean. It can be used with light loading or as part of your warm-up lifts before starting your main clean session. It is also used as a main exercise within a Weightlifting session.

When it’s used as a main exercise, it is usually on a day after or before a heavier Weightlifting session as the loads are lighter and the focus is on speed.

The power clean is often taught to beginner Weightlifters as a way to teach the movement of the clean without having to get into a squat position.

How Many Sets and Reps Of The Power Clean?

Generally, you will perform 4-6 sets of 1-3 reps at approximately 65-90% of your clean 1RM. The lower percentages are for emphasizing the speed of the lift while the higher percentages, while still emphasizing speed, become more strength based.

The no feet variation of the power clean is to emphasize the correct bar path. By forcing the feet to stay in place, you have to complete your pull in order to pull yourself under the bar. If the bar moves away from the body, it will be very difficult to get low enough to catch it.

No hook grip is often used further away from competition as a way to strengthen the grip and arms. However, the loads you power clean will be fairly limited by the grip. 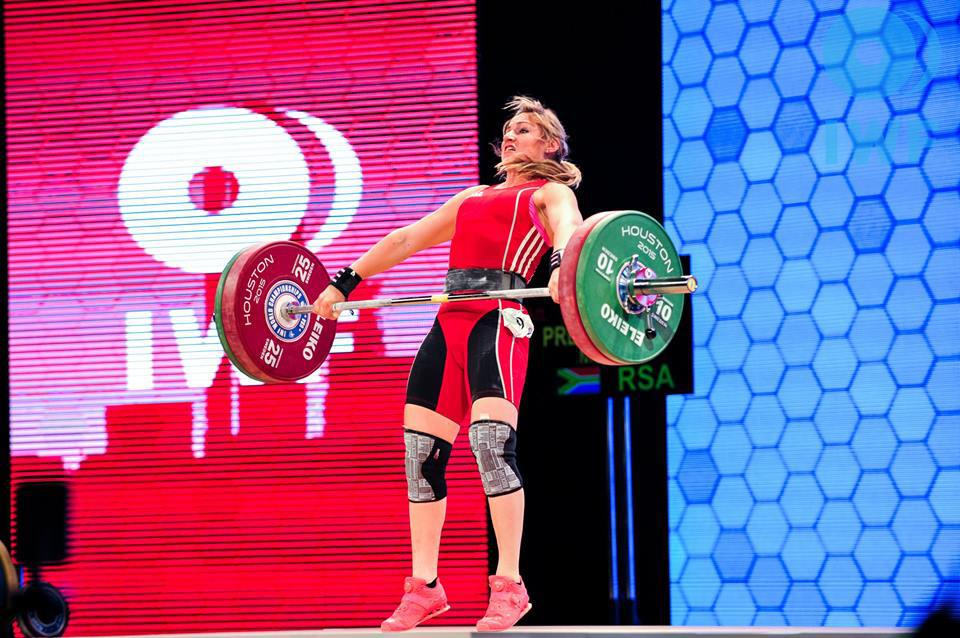 Don't Know How To Start With Weightlifting?

Get your 7-Day Free Trial to our RAWR Weightlifting Program!

You're almost there! Fill out the form below and get instant access!